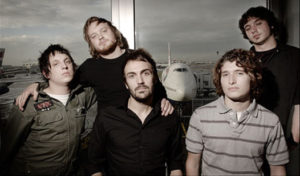 Lyrically they examine the socio-political identity of the Afrikaner, the role of religion in Afrikaner culture, and the role of Afrikaner culture in South Africa. A lot of their lyrics can be interpreted as blasphemous and have therefore sparked strong resistance from the conservative Christian community.

The band has been embroiled in controversy. Their name, which translates as “Fuck off police car,” is quite ironic given the extremely high crime rates currently in South Africa. It initially had radio stations hesitant to play their tracks and the mainstream media did not want to use it in full, out of fear that it may offend, but this attitude quickly changed.

Fokofpolisiekar went into hiatus in 2007 and has not released a full length album since the release of their 2008 EP Antibiotika to day. They still perform regularly in front of huge crowds at SA’s music festivals though. 3 bands spawned out of Fokofpolisiekar between 2007 and 2009: Van Coke Kartel, aKING and Die Heuwels Fantasties.

Seen in/at: As Jy Met Vuur Speel Sal Jy Brand was released six months after the band was formed, and one of its tracks, Hemel Op Die Platteland, became the first Afrikaans song to be officially playlisted on the national radio station, 5FM. Since the release of Lugsteuring they have achieved various number one songs on student and campus radio stations like TUKS FM, Matie FM, Kovsie FM and UCT Radio.

In 2004 they were invited to perform at the prestigious Pukkelpop festival in Belgium, sharing the bill with bands like The Darkness, The White Stripes and Faithless.

After releasing Monoloog In Stereo in 2005, their previous CD sales doubled within the first few months. That year Fokofpolisiekar headlined Oppikoppi, Up The Creek,Stellenbosch Jool and the OppiAarde rock festivals. They visited London for the first time in October 2005 and enjoyed two very successful shows. In November 2005 they opened for The Violent Femmes at the Coca-Cola Dome in Johannesburg.

In March 2006 they opened for Metallica at the Coca-Cola Colab Massive Mix in Cape Town. In November 2006 they enjoyed a successful European tour that took them back to London, the Netherlands and Belgium.

It was all too much of a good thing though. After four years of non-stop gigging they felt the need to slow down. Six months after the release of their ominously titled, second full-length album, Swanesang (“Swan song”), Fokofpolisiekar announced in March 2007 that they would be taking a temporary break to allow themselves an opportunity to focus on personal projects. It was during this break that Van Coke Kartel, aKING and Die Heuwels Fantasties gained momentum.

August 2008 Fokofpolisiekar leaped back into the spotlight with Antibiotika, a CD single and DVD combination, that showcased four new tracks and all their music videos to date.