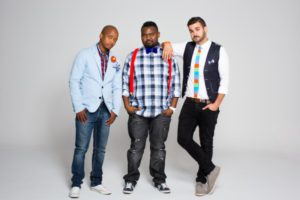 Mi Casa is a house band based in Johannesburg, South Africa and consisting of 3 members, Dr. Duda (producer) and pianist, J’Something (vocalist and guitarist), and Mo-T (trumpeter). The band was formed in early 2011 in Johannesburg when all three future members were at a night lounge and decided to perform together. A few months later, they released an album titled Micasa Music, which “went gold” quickly and won several awards at the 18th Annual MTN South Africa Music Awards in 2012.

The music industry is nothing new to Mi Casa, the band producer Dr.Duda has been in the industry for over fifteen years, producing and DJing alongside the likes of DJ Fresh, Dj Mandla, Dj Mbuso and making hit tracks featuring talented vocalists such as RJ Benjamin, J-Something and Zodwa amongst many others.

J-Something is a talented songwriter, vocalist and masters the guitar. This sensation began reading music at the tender age of eleven and this is when he first started playing the guitar. He has also worked with a lot of producers in the past including international artists. His zest for life and music breaths energy into the band.

Mo-T is the band’s trumpeter; he oozes with talent and lives his life through music. This talented young man comes from a musically rooted family and this is where the music bug bit him. His father, who established and played the trumpet for Mango Groove, taught him to play the trumpet at a young age and he has never looked back.

Awards and Recognition: The band received a lot of attention from the public in late 2011. Their hit single “These Streets” was taken from the album Micasa Music. which showcased the unique urban jazz sound of the band. It was not long before the band was on every major South African radio and music video chart at number 1, where it remained for weeks. The band went on to open for a number of major international acts, including The Layabouts, Reel People, Tortured Soul, and YMCMB’s Canadian Hip Hop recording artist Drake.

Their second single from the album, Heavenly Sent, also made every major South African radio and music video chart, and earned them South African Music Awards (SAMA) nominations for “Best Dance Album”, “Album Of The Year”, “Group Of The Year”, “Newcomer Of The Year”, and “Record Of The Year”. Mi Casa’s Newcomer of the Year nomination was met with controversy when some people mentioned that the group’s producer, Dr. Duda, was clearly not a new artist. This single was remixed by Charles Webster, marking the first international recognition for the band.

The band went on to release their third single, “La Vida”, which included a 3-D animated music video. This track was remixed by British house producer Atjazz.

In 2014, the band performed at Ultra Music Festival in South Africa on the Soul Candi stage.