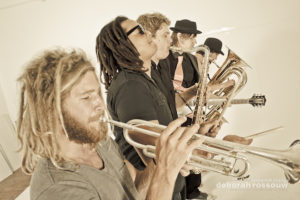 The Nomadic Orchestra is a five-piece instrumental dance band based in Cape Town. The primary goal of the Nomadic Orchestra is to get people moving. The band makes an infectious kind of high-energy dance music – even the most prudish find themselves unconsciously tapping their feet. The Nomadic Orchestra is strongly influenced by traditional music from the countries of South-Eastern Europe: Macedonia, Romania and Serbia. They are also influenced by Klezmer, gypsy and circus music as well as contemporary western party music. Their musical training brings a strong jazz aesthetic to the band, and thus an emphasis on improvisation. The music that the Nomads play is original and composed by members of the band.

The Nomadic Orchestra was born at the party “Balkanology: The Resurrection” in April 2009. Balkanology has been bringing quality Balkan music – both live and electronic – to the Cape Town scene for many years and has presented more than a handful of wildly successful parties. As well as playing alongside local acts such as Goldfish, Freshly Ground and Prime Circle (to name just a few), the Nomadic Orchestra have opened for and played back to back with international Balkan acts Shazalakazoo , Boom Pam and Balkan Beat Box. On the Cape Town scene, The Nomadic Orchestra have played gigs with Mr Cat and the Jackal, Ma’original,Toby2Shoes, Captain Stu, Manouche, The Bone Collectors and Peachy Keen.

Projects: In March 2014 The Nomadic Orchestra carried out a campaign called #FindTheNomads which aimed to take an innovative and interactive approach to marketing. Through their social media platforms, The Nomadic Orchestra would release clues about the location and timings of a series of 10 surprise pop-up shows happening in and around Cape Town. The hope was that fans and onlookers would document and share these pop-up shows through social media – creating content for the band as a result. In a short documentary directed, filmed and edited by Tash Montlake and produced in association with PopsicleTV, the Nomads share their thoughts about the #FindTheNomads campaign and what went into creating it. View below.