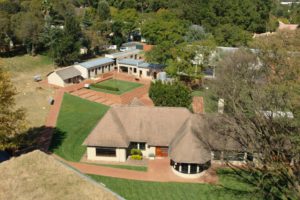 “Liliesleaf was an old house that needed work and no-one lived there. I moved in under the pretext that I was a houseboy or caretaker… [and]wore the simple blue overalls that were the uniform of the black male servant.”

So wrote Liliesleaf’s most famous resident, Nelson Mandela, in Long Walk to Freedom.

But Liliesleaf is more than a place touched by this most remarkable of men. It is a place steeped in history, with a fair share of mystery and intrigue thrown in. As an embodiment of apartheid resistance and the liberation movement which helped to shape the new South Africa, it is not only a historical site but, with its heritage status and a clutch of awards, it is arguably the best museum in Johannesburg, perhaps even in the country. Despite these accolades, Liliesleaf is still a relatively unknown attraction.

Liliesleaf can claim a stellar cast of anti-apartheid big hitters: Walter Sisulu, Bram Fisher, Joe Slovo, Govan Mbeki, Wilton Mkwayi and Denis Goldberg are but a few. To appreciate all that Liliesleaf was then and all it still represents now, you need to understand a little of the historical backdrop.

In August 1961 the Communist Party – banned since 1950 – used funds from the Soviet Union to purchase Liliesleaf through a Front Company (Navian (Pty) Ltd.), having earmarked the dilapidated farm as the perfect secret meeting place. At the same time the ANC – provoked by the Sharpeville massacre – was switching from passive resistance to armed struggle with the founding of its military wing, Umkhonto we Sizwe (or MK). Since the Communist Party and the ANC had common interests, Liliesleaf became the operational headquarters and refuge for both groups.

But the dramatic 1963 police raid at Liliesleaf saw the key players of the liberation movement arrested in one fell swoop. The raid cracked the backbone of apartheid resistance and laid the foundation for the infamous Rivonia Trial.

Essentially all paths on the road to South Africa’s liberation lead either to or from Liliesleaf. There is no better way to untangle the thorny knots of this tumultuous chapter of South African history than to pay a visit.

Primarily, the Liliesleaf story is told using cutting edge technology, with intelligently edited interviews and video footage in which personal anecdotes breathe life into the dryer bones of historical fact.

Liliesleaf doesn’t present the usual story about apartheid, or the same stark images we’ve come to expect from exhibitions and museums. This is the deeply inspiring story of a very brave group of men and women who risked all to change the status quo. These people embodied the idealistic Freedom Charter that they were striving to make reality.

In fact, one of the most precious artefacts on display at Liliesleaf is an original signed copy of the Freedom Charter. Thanks to the work of the Liliesleaf Trust, this historical document has been secured and preserved for the people rather than being in the hands of a private collector.

It’s difficult to describe all there is to see without giving away the best bits, but you will be intrigued by the mystery of Mandela’s missing gun. You will be riveted by the thrilling story of the Great Escape. Find out what the Africa Hinterland Safari Truck was really up to and, if you remember, be sure to ask how the onsite Cedric café got its name.

The content of the displays is probably unsuitable for younger children. But for older children this ought to be part of the school curriculum as it draws together the myriad facets of the struggle in an engaging manner, painting a more complete and balanced picture than you will find anywhere else.

However much you may know about this chapter of history, a visit to Liliesleaf – a place of liberation – is highly recommended.

You can pick up a Self Tour leaflet or pay a little extra to have a guide, ensuring you don’t miss any of the highlights. Liliesleaf is immaculately maintained with ramps for wheelchair and pushchair access. There is also a car park and café.

Liliesleaf is a work in progress with continuing efforts to add to and upgrade the existing displays and archives. The premises are available as a venue for conferences, functions and events. An adjacent boutique hotel is also planned.