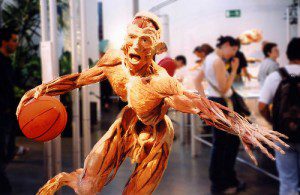 1977. Gunther von Hagens develops a process called Plastination. By means of forced impregnation he is able to preserve human and animal tissue by replacing the fat and water with certain plastics. The specimens do not decay, do not smell and can even be touched. Body Worlds – the resulting exhibition which has toured the world in various formats – is what you could call an anthology of the human body, a kind of love letter to our bodies and how they grow, change and eventually decay.

The exhibition begins with a foetus at 3 weeks, just a tiny speck in a small glass trough. An 11th week foetus looks like a tiny alien. And at 22 weeks, the foetus is nearly a ‘proper’ human. What is most incredible is how, given the chance to view these in relation to one another, one is able to appreciate the beauty of the entire process.

But von Hagens is not solely obsessed with the biological. Blown-up photographs of famous philosophers and key thinkers are mounted on some of the walls, with quotes beside them explicating truths about life. Kahlil Gibran, Simone de Beauvoir, Johann Wolfgang von Goethe are all guest stars of Body Worlds, each representing a unique aspect of the amazing cycle of life.

The plastinated specimens are posed in various tableaux, from The Moulting Woman – a plastinate stepping out of her skin, to The Saxophone Player, a plastinate whose back is opened to reveal his vertebrae. The entire experience is so utterly bizarre, and just a tad gruesome, that it feels as if one has stepped into a science fiction film.

But the feeling that ultimately takes over is one of amazement and wonder. To think that it takes 1500 hours to prepare a specimen and that each specimen was once a living human being is mind-blowing.

Besides the process of ageing, the exhibition also displays the negative effects disease or an unhealthy lifestyle can have on the body. From the thick layers of fat enveloping an obese person to the tar-infested lungs of a smoker, Body Worlds shows us, rather than tells us, exactly what harm we are doing to our bodies.

Body Worlds is nothing short of a journey, one of learning, discovery, bewilderment and surprise. This is not something you will see everyday and – perhaps surprisingly – it is definitely something to share with your children. It is the miracles of life, death, birth, decay, movement and growth, all sprawled out into posing plastinates with an uncanny sense of realism.