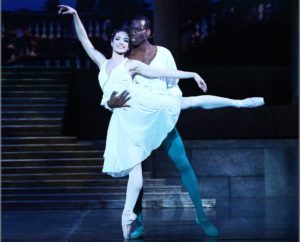 Drama and ballet combine in Romeo and Juliet to present a powerful and visually awesome story of young love and family tragedy.

Introductory speeches from Shakespeare’s play set each scene, making the action easy to follow. The scene of the two warring families of Verona as the curtain rises on a lively and colourful marketplace. It is almost too much to take in as the different groups and individuals mix and flow naturally while going about their business.

Throughout the ballet, the large supporting cast add immensely to the drama, constantly acting out their parts, whether taking sides in the feuding, scattering in panic from the fighting or following the funeral processions, grieving.

Each scene is visually impressive, making a grand, almost Old Master painting of colour and design. The poised opening of the Capulet ball with its rich reds is sumptuous, while the stark lights fading into the cowled figures and lit candles in the Capulet crypt send shivers down the spine.

Elaborate costumes and the measured, over-extended entrances of the ball guests point out the rigidity of this closed, traditional society where there is no acceptance of spontaneity. The mischief and antics of Romeo and his friends, particularly in this production, Aaron Smyth as Mercutio, perfectly timed, are welcome comic relief.

This is, of course, the story of young Romeo and Juliet, only 13 years old, we are told in Shakespeare’s words. There are four ballerinas dancing Juliet. I saw Kirstel Jensen in her debut and it was a delight. She was so fresh and young, a child in her Nurse’s lap, the love-stricken young girl turning, like a magnet, to her love, the fluid surrender of the balcony scene, the desperate child faced with an impossible dilemma and the fear, so vividly displayed, as she contemplates her poison.

Romeo is, of course, also played by four dancers, in this case tall Juan Carlos Osma with technical mastery. Tybalt, stark in his contrasting black, is another dominating figure, here danced by Jonathan Rodriques.

The fight scenes, all dramatically choreographed with split-second timing, are thrilling as light shimmers off the rapiers clashing all over the stage.

The ballet is danced in three acts, with two intervals, so it’s a long show, perhaps too long for some of the many children at the matinee, but the story is eminently accessible.

Joburg Ballet’s Romeo and Juliet runs until 24 July 2016 with performances on Tuesday, Wednesday, Friday, Saturday and Sunday, at the Joburg Theatre.