Search
By Daisy on August 25, 2016 Uncategorized 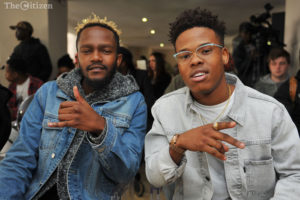 For the first time in history, the MTV African Music Awards is set to be hosted in Johannesburg. The ceremony will take place at the Northgate Ticketpro Dome on 22 October 2016, and will feature some of the biggest artists from the continent.

Popularly known as the MAMAs, it recognises and rewards musicians and achievers who have made the biggest impact on African music and youth culture over the previous year. Previously, the award ceremony has been held in Durban, KwaZulu-Natal.

MTV Base made the surprise announcement at a press conference held on Tuesday, which was attended by the likes of Babes Wodumo, Tresor, Khuli Chana, Kwesta, Mafikizolo and Nasty C.

Speaking about the decision to move the event to Johannesburg, rapper Kwesta said that the city is a special place for artists to draw inspiration from.

“The city affects pretty much every single thing we do. There’s not a lot of places in the world that you find such diversity, such diverse food and culture. These are the things that artists draw from. The city has directly impacted on my career- every good song you’ve heard from me is from and inspired by Joburg. It’s a beautiful thing,” he said.

The event’s organisers have promised that they will reveal the international and African performers over the next few weeks, with the announcement of nominees to be held in Johannesburg and Lagos, Nigeria.