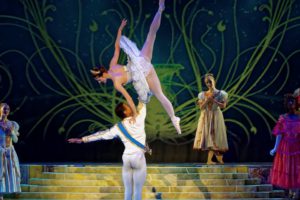 As the auditorium darkens, star-like spots of light swirl around the ceiling and walls; transporting us into the fairytale world of the Brothers Grimm rags to riches folktale.

It is a pretty rather than a dramatic first scene that greets us as the curtain rises on a colourful marketplace where we meet the wicked stepmother lavishing fineries on the two ugly sisters; the latter played with suitably grotesque comic wit by the Company’s two male ballet dancers, Chase Bosch and Keke Chele. Senior Soloist, Kitty Phetla as the stepmother, is wonderfully elegant and expressive in her gestures and movement and is a real pleasure to watch.

In the King’s Court, bustling with activity in preparation for the Ball, the jester, Thabang Mabaso, is most striking as he winds his lithe body around everyone and everything in the room.

Set designer Andrew Botha has managed to evoke the splendour of the palace and the ballroom without spending lavishly on big solid set pieces, using painted murals and screened backdrops very effectively. The most solid set is inside the house where we find cinders at the fireplace in the kitchen with a view of the sisters’ upstairs bedroom.

For the first time this ballet has been performed to the music of waltz king Johann Strauss – his only full-length ballet score – because paying for the famous score by Sergei Prokofiev proved too costly. Fortunately Strauss’s delightfully rhythmic and melodious music is perfect for this ballet and certainly had me tapping along. Sometimes I heard echoes of the score of ‘My Fair Lady’ in parts of it – Louwe was German and was surely influenced by Strauss when he wrote the score with Lerner for that other famous rags-to-riches musical.

Cinderella, enchantingly familiar to us from childhood, is not a very dramatic ballet in comparison to others like Swan Lake, Giselle or Ondine. There is a fair bit of humour and comedy in the spiteful (as opposed to Snow-White’s dark) relationship between the stepmother, stepsisters and Cinderella and the romance between Prince Charming and Cinderella is pure and simple with no complications.

Magical moments when the four little mice played with endearing trepidation by the young toddlers of the Company are transformed into the adult liverymen who pull the gilded pumpkin-shaped coach to the ball with the transformed Cinderella in her elegant ball gown of pure white with a sparkly teal-coloured pattern over the bodice.

Apart from the garish ball gowns of the two ugly sisters and the darker hued one of the stepmother, the other costumes are white or pastel with glittery trimmings in silver or gold creating the prettiest array of colours like so many delectable petit fours.

The real drama for the audience is in the dancing and is particularly evident in the final pas de deux between Principal dancers Jonathan Rodrigues as the Prince and Burnise Silvius as Cinderella.

Rodrigues is a perfect Prince Charming – dark, tall and handsome.  Together with the beautiful grace of Burnise Silvius, the innocent intensity of their romance is very believable and brought a tear to my eye.

The magic of ballet is as always in the supremely confident air with which the dancers appear to float across the stage, lifting and throwing their partners into the air as light as puffs of meringue while maintaining those perfectly straight and elegant body lines that defy the functional practicality of human limbs.

This production will lift your heart and bring a tear to the eye in the sheer joy and exuberance of the dancers. So put on your best party frock and go to the ball.

Joburg Ballet’s Cinderella runs at the Joburg Theatre until 9 October 2016.

A ‘Rags to Riches’ fundraising Gala takes place on 6 October 2016 at Joburg Theatre, with performances commencing at 7.30pm. Tickets costs R600 per person. Raffles and prizes arranged. All funds raised go to the South African Ballet Theatre Trust and are used to benefit Joburg Ballet.