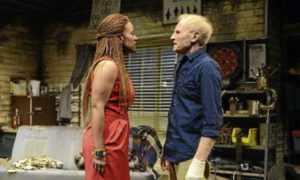 Dwayne Combrinck is a man with demons. You can see this as he walks into his workshop, a bloodied baseball bat in hand. You can see this in the anger he articulates and the acerbic vitriol he spews when provoked. But not all of his demons are fuelled by the sheer force of anger or terror. He’s a much more complicated character than that. He may be a white South African, in his early 60s; but penned and performed as he is by Paul Slabolepszy, he embraces a profound vulnerability that counterpoises his toughness and explodes stereotypes in three-dimensions.

To the world, he’s a tough guy. A “debt collector” – who uses whatever tactics, however dirty they may be, from his “Far East” Rand premises, to get money out of difficult customers. He also welds security gates.

Dwayne’s married to Shanell (Charmaine Weir-Smith), a blonde poppie with her own sense of what is morally right in the world, with a fashion and linguistic verve that will take you back to stereotypes of Brakpan in the 1970s. Hard as nails around the broken dreams she holds in her heart, and beautifully fleshed out by Weir-Smith, she too is a product of very specific apartheid induced bruises and scars.

The vignette of their life together that we are exposed to in this play is thwarted by loss and gain in surprising ways that catches you slipping into stereotypical assumptions. When you hear that someone has died at Dwayne’s business, you jump to startlingly violent conclusions. When the Combrincks discover a potential lottery win with unimaginably huge moral ties on their premises, you jump to others. But the tale woven by Slapolepszy is curiously less predictable in its nuances and realities than you may anticipate.

When Namhla Gumede, an elegant, self-possessed young black woman with an English accent (Renate Stuurman) shows up on their doorstep, mystery pervades. With a warm heart triggered into life by her loneliness, Shanell confides in her, gives her hardly a moment to get a word in edgewise, but in doing so, offers her – and you in the audience – the tools to figure out why she’s there. And this aspect of the story, embedded in a series of hairpin bends as it is, is fairly predictable.

Having said that, conjoined with a fantastically convincing set, the absolutely appropriate coordination of sound and light brings the violent Highveld storm in the title to Shakespearean splendour in this tale of exile and identity. Conceived and crafted to have been launched to coincide with the 40th anniversary of the 1976 Soweto Uprising – which it did: it debuted at the Market Theatre in June – its season now, amid the hail of racist accusations and violent antagonism that is still rocking our world, remains deeply prescient.

It’s a work, similar to plays such as Steven Boykie Sidley and Kate Sidley’s play Shape, and Mongiwekhaya’s I See You, which offers an introspective and thoughtful but not soft voice to embrace a reflection on the fact that not everything is as it seems and that nuance and even deep love can exist even in the most apparently blatant of racially-infused situations. Like the whole repertoire of Slabolepszy’s work written in the voice of its era, Suddenly the Storm is an important and beautifully written work that encapsulates issues that will set many a post-theatre dinner table afire with dialogue.

Suddenly the Storm runs at the Auto & General Theatre on the Square in Sandton until 19 November 2016.