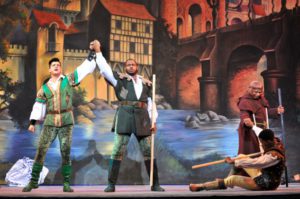 There’s something about the panto this year that raises the stakes in this annual extravaganza.

Several somethings in fact, elevating the show from the usual good fun but instantly forgettable romp into a classier, more memorable event.

For her 29th panto production, writer and director Janice Honeyman has given us Robin Hood and the Babes in the Wood, a historical mash-up where the facts never get in the way of a good story.

This fresh tale breezes in with a delightful fun and fizz, creating the sparkiest panto for years with a spirit that feels smarter, sassier and more perfectly penned. The laughs flow faster, the intelligence crackles and political quips including the Saxonwold Shebeen have been updated almost on the fly, as parliament gives us a pantomime of its own.

There are still the usual fantastic sets and magnificent backdrops, ridiculously opulent costumes and impressive props. The stage is alive with hunky men, gorgeous girls, at least one fairy, and lots of little stand-out character moments.

But there’s been a clearing out of clichés, and the gimmickery has toned down while the story line has been toned up. The predictable audience participation sing-along song has unpredictably disappeared, which helps to make the show feel tighter and more honed.

The only fill-in spot comes right before the final wedding scene when everybody needs time to wriggle out of one splendid costume and into something even more eye-popping. So Bongi Mthombeni as Will Scarlet, Jaco van Rensburg as Alan a-Dale and Clive Gilson as Lenny Loser come on to perform The 12 Days of Christmas. And they do it so well and with such good humour that it unexpectedly becomes a highlight.

That’s a great thing about this panto, it’s packed with special moments as actors playing the smaller roles also make their mark.

There’s nothing small about Desmond Dube’s Friar Tuck, and Dube has proved a real panto gem over the past few years. But Graham Hopkins was my big surprise. I’ve seen him being silly in plenty of shows before, and here he’s superb, swaggering around in flamboyant outfits as the dastardly Sherriff of Nottingham, inflated with Donald Trump-style hubris as he ‘state captures’ the delicious Maid Marion

The show also delivers a welcome dose of girl power. Kate Normington is hilarious as Silly Sylviana, the spirit of the forest, who very capably holds the story together. Carmen Pretorius as Maid Marian may be pining with love for muscle-bound Robin Hood (Izak Davel), but she’s a feisty kick-ass kind of gal, not some meek maiden who needs rescuing. She has a lovely powerful voice, although she doesn’t get to do enough singing.

Meanwhile Candida Mosoma is fabulous as Much the Miller’s son, and the energy between these three ladies is another nice touch that Honeyman has given her story.

The live band led by musical director Rowan Bakker whizzes us through some great medleys to satisfy all tastes and ages, with neat dance routines to everything from today’s hits right back to Def Leppard and AC/DC.

Honeyman has created the usual split-level entertainment with plenty for the kids and more than usual to keep the adults happy. All woven around a fairy story that’s well worth watching.

Robin Hood and the Babes in the Wood runs at Joburg Theatre until 30 December.