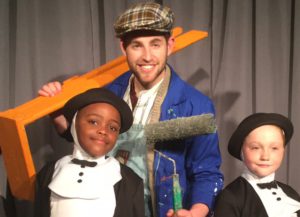 What would you do if you discovered your house to be filled with curious exotic birds from Antartica, who want nothing more than snuggling in your freezer or eating more raw fish than you can afford? Mr Popper (Samuel Hyde), a bit of an irresponsible adult, if ever there was, gets to bring havoc into the domestic bliss of his Stillwater home as he gets to experience real heartsore in taking adult decisions. Mr Popper’s Penguins, a favourite of American children, which debuts in South Africa, blends a range of personal challenges with strong light and colour, an overload of cuteness and some really homely values.

On many levels, it’s an ideal end of year family show, bringing together all the issues of responsibility and wildness, dreams and possibility, exploration and history and the exploitation of Hollywood into one story. But scripted in the 1930s, as it is, it tends to exude a lot of social blandness which might make contemporary children feel a little impatient or confused. Do young parents address one another as “Momma” and “Poppa” respectively, still? Perhaps not. Replete with all the fabulous attention to detail of set designer Stan Knight, and costume designer Sarah Roberts, which keeps you enthralled and looking at all the different elements, the work on the whole lacks the kind of tight choreographic cohesion we have seen in this theatre in the past and this hurts its overall fabric and texture.

From a sound perspective, Sanli Jooste in her role of the mommy of the tale often fights vocally with the piped music: and the casualty? Her lyrics. You can’t hear what she’s singing. When the idea that she’s going to be performing on a piano is mentioned, you may smile with gladness, feeling relief that a real instrument will adorn the stage, but sadly the cleavage of her mimed piano performance and the music itself resonates illogically.

It is, however, the children in the role of the eponymous birds themselves that lend the work the charm and specialness that really makes this production worth seeing. While you may have expected more “penguinnish” choreography in the stereotypical understanding of how a human child becomes a penguin, these little ones have been well tutored and carefully directed in the different idiosyncrasies that wild birds forced into a domestic context would generally manifest. Sizwe Sibotshiwe’s heart melting moment when he acknowledges his sheer unadulterated loneliness is the unequivocal gem moment of the piece, but it is the squad of five penguins that capture the froth and nuance of the piece, and lend it fire.