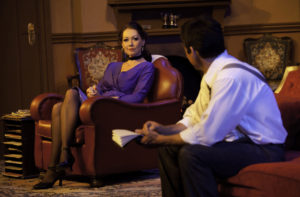 Something has to be said for the intricate melding of the minutiae of Victorian language with contemporary ideas, the blossoming into life of a multitude of characters supported by the hand-held technology resonant of radio theatre, and the shenanigans and skulduggery penned by Sir Arthur Conan Doyle in the 19th century. All in one evening’s theatre experience. Playwright and performer Robert Fridjhon brings all of this together with utter finesse.

But it is the directorial hand of Alan Swerdlow that adds the cherry on top of this very fine and beautifully crafted piece of work which will have you laughing out loud even if you have come to the theatre on your own. Blending sophisticated if oft very rude repartee and a rash of puns with sheer slapstick comedy and engagement with the audience might not be everyone’s cup of tea – and it certainly isn’t within every cast’s capabilities – but here you get it all, tweaked by an exceptionally ably cast into an intelligent and nuanced laugh-a-second fest. It’s Sherlock Holmes with a dollop of farce, a peppering of British self-deprecation and some of the most hilarious costume decisions you can imagine.

And while there are some digressions in a Goonish or a Monty Pythonesque direction, and you may expect to see a dead parrot at any moment, you don’t: the references are contained and teased out as references and the work holds its own with complete excellence, foraying into issues of sexuality that the Sherlock Holmes tales have always hidden under carpets and in cupboards.

As with many performed murder mysteries reaching from the repertoire of film stars such as Margaret Rutherford and Myrna Loy, often it is the hilarity of the tale rather than the nitty gritty or bloodiness of the crime that are the central focus. Similarly, Fridjhon’s Sherlock Holmes teases apart an alleged stealing of the famed Koh-i-Noor diamond, the biggest in the world, which is owned by Queen Victoria, into a madcap journey between England and France, with a bit of Indian colonialism in between, replete with a couple of murder victims who are actually not dead: it’s stuff to make your head spin.

The work’s small versatile cast simply sparkles: and the helpless laughter you experience in the context of sheer beautiful farce pervades, as the work casts the whole improvised business of a play within a play on a theatre stage. Craig Jackson as Dr Watson (amongst others) and Bronwyn Gottwald as the inimitable Mrs Hudson (amongst others), are utterly perfect for the complexity of the roles, and everything from a self-standing big dress for Queen Victoria to a cat’s tail which becomes the British Prime Minister’s moustache will have you screeching with mirth. But a warning to the unsuspecting: Don’t see this play on a full bladder. It’s as good as it gets.

Sherlock Holmes and the Curse of the Queen’s Diamonds runs at the Studio Theatre, Montecasino until 15 January 2017.