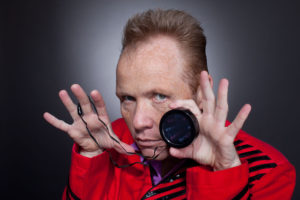 There was knee touching, a lot of mooing and a few cheeky lap dances. But in Andre’s own words, it’s the “best show you’ve never seen”.

Montecasino’s Studio Theatre is small and intimate and the stars of the show are all audience members who, in their waking moments, said that being hypnotised was a strange experience where they were aware at all times of what they were doing, but not in control.

But the big question remains: is it real? And quite frankly, the jury is out. There’s a shortage of volunteers available to be hypnotised to begin with, and apparently some individuals are more susceptible to hypnotism than others. So a rational, questioning mind does just that. It questions.

However, it is clear that there is a different group of volunteers every time. Well, almost every time. Strangely enough, there are some hypnosis junkies out there, with one young volunteer from Brakpan seemingly delighted to have his 6th moment in the spotlight. There would have to be a giant conspiracy to get so many different people convincingly involved on such a regular basis and yet, to the uninitiated, it’s incredible that lights, music and well-chosen words can have such a major and immediate effect on people.

Whether you’re sold on hypnotism or a complete sceptic, it doesn’t actually matter. You’ll either love the show believing everything you see, or you’ll be completely fascinated as you doubt or try to work out what’s going on. An enjoyable evening is therefore guaranteed, especially with the added lure of seeing your friend make a spectacle of themselves while they impersonate anything from pop stars to washing machines.

Andre’s show is an entertaining and inexpensive night out, and he’s obviously doing something right since he’s been consistently hauling in the crowds for almost quarter of a century.

Though the show is billed as ‘family entertainment’, I found that some of the content would be unsuitable for younger children. And you may consider an evening out to the show as a neat corporate experience, but it could go either way – lap dancing your boss could be career suicide or result in an unexpected promotion. It depends.

You also have the opportunity to purchase hypnotic merchandise to assist in giving up smoking or chocolate. I don’t smoke and I’m not willing to give up chocolate. However, I could certainly be persuaded to go again with a gaggle of friends and might even be tempted to volunteer to be hypnotised.

You can watch Andre (or alternatively, if you successfully volunteer, the audience can watch you) at Montecasino’s Studio Theatre until 19 March 2017.