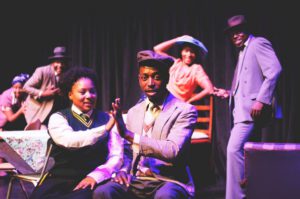 The Market Theatre has had a long and passionate love affair with Sophiatown, a drama with songs about a family living in a house in Sophiatown during the turbulent 1950s when the Nationalist Government forcibly removed them from their houses. They were taken to Meadowlands in 1955, (often with the promise of ‘better accommodation’) and some houses were even bulldozed. A whole culture of song, dance and jazz was torn apart and almost destroyed, while families were broken up and people displaced.

On stage are 8 characters who live in one of these houses. Their lives are interrupted when a Jewish woman, well-played by Christine van Hees, responds to an advertisement in Drum magazine inviting a white woman to move in with the family. The first part of the play mainly centers on her moving in and trying to adapt to her new surroundings, while meeting the different, often clashing personalities who live under one happy roof. Coming from the (then) more affluent Yeoville, the living conditions and culture are somewhat alien, but eventually stimulating and intoxicating to her. The second half of the production shows the influence the violent removals had on the group.

Malcolm Purkey directs with a sure and steady hand. Eight characters, most of them permanently on stage, move effortlessly through the big space, filling it with their often large personalities, yet forming a close emotional bond that is broken once the police move in.

The director and writer look at the clash of cultures, but also how these different cultures can live together in harmony – a kind of blueprint for which was to follow many decades later. Although not a full-blooded musical, the songs have a vibrancy, yet also a melancholy sadness that reflect the turmoil inside many of the characters, notably an “honest” criminal and his abused girlfriend who form the heart of the Chicago of Johannesburg during the fifties. For me the most tragic character was an older man, Charlie, who made his living from doing odd jobs and shining shoes. His story is one of the most touching.

The production laments the forced removals and taps into the emotions experienced by the displaced people when evacuation stares them in the face. It avoids overt sentimentality, mostly through the sober, authoritative direction and the rhythmic, effective songs. The performances from the cast, especially Barileng Malebye as Princess and Sandisile ‘Sandi’ Dlangalala as Mingus are excellent, while Sechaba Ramphele as Jakes and Joel Zulma as Charlie also give stand-outperformances.

As the Market Theatre, now in its 40th year, is part of Johannesburg and its culture, so is the town that was destroyed but resurrected in a musical form from the ashes of the ironically titled suburb of Triomf. It would be well worth your effort and money to support this inspiring production.

Sophiatown is on at The Market Theatre until 14 May 2017.