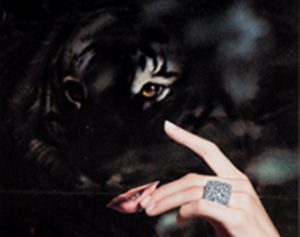 An uncomfortably dizzying association between the ideas of feminist magical realist writer Angela Carter and between-the-wars German collagists John Heartfield and Hannah Höch, seems the most appropriate way of describing the wild and terrifying humour, explicit and witch-like sexuality and rough and tumble gamesplaying in this, the first solo exhibition of Rebecca Haysom.

Entitled The Tiger’s Bride, this tender and quivering yet seemingly bruised body of close to 40 works, is collectively about quirky humour, dark laughter and the slithery teasing apart of mythical practices, fairytales and idioms. And art history is tossed into the mix too. Here’s a sprinkling of Dalí, there’s a quotation from Rembrandt and another from Van Dyk. Nothing is sacred beneath the robust yet delicate scalpel of Haysom as she slices off limbs and reattaches them at fantastical angles, blending tigers and women, forcing scale relationships that are off the radar and constructing roses of papier mâché billed Make her Cry.

This latter work is a witty play on what you see. There’s a fabulous scene with a very young Maggie Smith in the Richard Attenborough musical satire Oh! What a Lovely War (1969). From far, the character played by Smith is demure and welcoming to young men and wouldbe conscriptees. But as the camera pans in, there’s something so garish and terrifying about her, that the values change irrevocably. As you gaze on Haysom’s bouquet and realise that these petals are solid and tough, something similar happens and the image becomes cruel and scary rather than sweet or romantic.

It’s a wonderland whirligig of an exhibition, albeit a precarious one: be careful what you find yourself admiring, it might just not be exactly what you think it is. That lady is a tiger, and the joke may be on you. While some of the works seem like one-liners, the more you look, the more they suck you into their depths of the kinds of possibilities that you can create with a spot of glue and a quick, sharp knife, ranging from biblical association to pornography.

The one work which seems anomalous in this collection is a large landscape painting at the end of the gallery on a sheet of loose canvas, which hangs like a curtain. More like a stage set than a work like the others, it offers a concatenation of values that chime oddly and will leave you unsure of yourself and of what you’ve understood by the rest of the work.

Is it all a stage set in the context of play acting? You can’t really be sure. Either way, understated and thoughtful, witty and bizarre and above all, reliant on a sense of careful construction of body parts on paper and ideologies in the artist’s head, this is a potent exhibition which is an embodiment of play and earnestness, with blurred boundaries between the two.

The Tiger’s Bride by Rebecca Haysom is on at Circa Gallery Rosebank until 29 April 2017.