Search
By Daisy on May 3, 2017 Current reviews Reviews 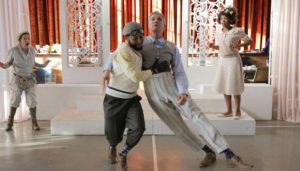 It’s always surprising when a play written in 1664 is just as relevant today as it was then. Brilliantly directed by Sylvaine Strike, Molière’s Tartuffe is just that. It’s at once charming and chilling, with physical theatre so subtly incorporated that, by the end, you feel like the human condition is light on its feet.

The set, designed by Sasha Ehlers and Chen Nakar, is reminiscent of a delicately iced Petit Four – all curlicues and flowing drapes. Lighting by Oliver Hauser and costume design by Ehlers compliment the stage perfectly with fantastical pastels for the good guys and grim darkness and reds for the bad.

Craig Morris is scarily believable in his portrayal of the evil trickster and religious zealot, Tartuffe. So much so that an audience member behind us gasped in fearful astonishment at a particularly evil action of his. Neil McCarthy, as the easily duped Orgon, has his comedic timing down to a tee, and it’s easy to see how Tartuffe could fall for Orgon’s wife, played by Khutjo Green. It’d be hard for anyone to resist her!

Vuyelwa Maluleke is translucent as Mariane, the dutiful daughter beloved by all, most especially the galant Valere, played by the irresistible Anele Situlweni, and most creepily and falsely, by Tartuffe himself. Damis, Orgon’s hot-headed son, ably played by Adrian Alper; the wily Dorine (Vanessa Cooke); and Orgon’s brother-in-law, perfectly cast and played by Camilla Waldman, quickly see through Tartuffe’s mask and the heat is on to expose him before all is lost.

A special mention must be made of William Harding, who plays three characters: the subservient Flipote, the officer of the court and, most wonderfully, the smarmy salami-spewing Monsieur Loyal, who is anything but loyal.

Strike has put together an incredibly talented cast, each one a master of their role, and these roles are demanding. A rhyming script, spectacular physicality which is made to look everyday, comedy underpinned by a frighteningly familiar rhetoric, and a rollicking story line filled with humour, emotion and an underlying darkness … and it’s made to look easy.

Tartuffe is on at The Fringe at Joburg Theatre until 25 June 2017.