Search
By Daisy on May 16, 2017 Current reviews Reviews 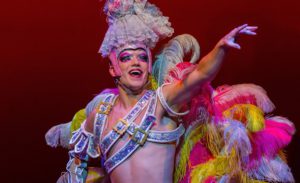 What happens when three drag queens decide to turn a new page on life, armed with a bus named Priscilla, lots of shoes and an urge to strut their stuff in the Great Australian Outback? The world turns on its heel, glitter and tears characterise the moves and you, in the audience, probably really do have the most fun you can have in a theatre. The stage musical of Priscilla Queen of the Desert is simply as good as it gets.

When you watch the original eponymous film which first saw light of day in 1994, you get a very real sense of the scrappy mismatched wildness that characterises sheer unadulterated camp ramped up to the max. On paper, it might be difficult to imagine how this utterly fabulous film could be translated into a stage production, but you’re in safe hands: the international and local creative teams behind this project have produced something uniquely beautiful and majestic in its visual glossolalia and kaleidoscope of sexual jokes and nuance, replete with technological tricks and surprises all along the way.

The tour de force performance is that of David Dennis playing Bernadette, the character who is undergoing gender reassignment, has a Les Girls history and is nursing a broken heart beneath that spirit of fire and all those wigs. While Mitzi (Daniel Buys) and Felicia (Phillip Schnetler) are in fine form, great eyelashes and performative splendour, when Bernadette’s on stage, she’s where your eyes are. But the hero in the narrative itself is the character of Bob, a redneck with vision and sensitivity, played with true aplomb and sheer grit by James Borthwick. The kernel of the tale of Priscilla is not only about acceptance and the magic of lip syncing your way through life, it’s also about the meaning of love and reflects very astutely on how sex is secondary to what love is about.

But there’s no smarmy soppiness in this brightly coloured essay on the madness and freedom of being able to stand on top of a bus in the middle of a desert and belt your heart out to an aria from La Traviata. It’s Drag with a capital ‘D’, which is about all the vagaries and joys of performing on stage as it challenges gender expectations. By the same token, it doesn’t hold back on the ugly face of homophobia and gay bashing that remains a part of being different in the world.

Generally, a show with a big cast, lots of energy and all the tricks in the make up bag that you can conceive of, is a great hiding place for inferior performances. That doesn’t happen here: Priscilla hides no one, and the ensemble, from the three divas suspended from the sky (Londiwe Dhlomo-Dlamini, Candida Mosoma and Thembeka Mnguni) to the yellow dragons and acid green cream cakes and shocking pink paintbrushes all dancing in sequence, to the cameo which features the child of Mitzi, are utterly fabulous – the choreography is tight and on form, and the costumes are unbelievable in their wildness and wisdom, appropriately grotesque luridness, speedy changes and sense of freedom.

With a sound track that melds everything from the Village People to Tina Turner, Cindy Lauper to Kylie Minogue, Priscilla’s sound is pastiche with a tone of saccharine and it celebrates difference with abandon. It’s a show that will continue reverberating in your heart for months.

Priscilla: Queen of the Desert runs at Teatro at Montecasino until 18 June 2017.