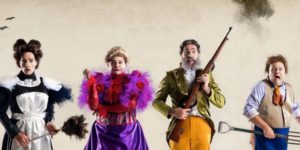 Feel like an evening of manners and frippery, ghosts and howling wolves, complicated hairstyles and seriously big dresses? The Mystery of Irma Vep has something for everyone, and it’s a slick, quick and deliciously fine production that will keep you laughing for months.

The Pieter Toerien theatre has become known for staging crisp and fabulous farce, but this piece of theatre ramps things up considerably. Mashing together the notion of the Victorian penny dreadful with Charles Ludlam’s inimitable approach to the ridiculous, in an utterly over the top two-hander, which offers not a little sleight of hand magic in the wardrobe department, The Mystery of Irma Vep is utterly brilliant. The performances of Weslee Swain Lauder and Jonathan Roxmouth beg comparison with those of no less than Michael Caine and Sir Lawrence Olivier in the fabulous 1970s film, Sleuth.

It’s a mad little yarn involving many things that go bump in the night, as well as a maid of a Victorian manor who has a couple of unexplainable talents and a hairdo to match. She’s obliged to serve the manor’s new mistress, one Lady Edna, of whom she isn’t awfully fond. There’s a painting with a weird aura, a werewolf or two, an oddly sinister ragamuffin manservant with a wooden leg called Nicodemus as well as some anagrams to spice things up. And of course, as the genre demands, there’s a foray into Egyptian tombs, a couple of jagged chases around the auditorium, and a delicious peppering of sound effects. Not to forget an unforgettably terrible improvisation for dulcimer and recorder which is so bad that it is fabulous, and some wigs and costumes that have so much personality, they should be listed on the cast list. But that’s not all: Lady Edna’s facial expression in times of great horror blends faux high drama with the ludicrous so finely, it deserves programme credits of its own. In short, this production is exactly what the doctor ordered.

Think of Mary Shelley’s Dracula, with the earnestness contorted into utmost hilarity, and the characters drawn at the bizarre and pants-wettingly funny tilt of caricatures emphasised to the hilt, and you might get a sense of the fun that is to be had as you discover the unrolling mystery of Irma Vep. But be warned: you will be lost in your own laughter way before the plot grabs you by its own tale. It’s a convoluted one, but it doesn’t matter. The work is so crisply constructed, and utterly flawless, it just doesn’t miss a beat. Clocking in at about ten minutes too long, it’s a theatrical experience in which you may find your face begins to ache as a result of too much laughter, but the funny never stops.

The Mystery of Irma Vep is on at the Pieter Toerien Theatre, Montecasino until 30 July 2017.