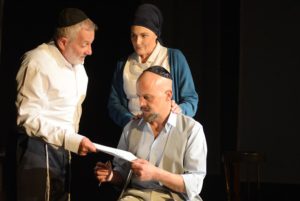 Asher Lev is a boy who struggles to draw the birds, flowers and other pretty things that his mother so desperately wishes he would focus on. Instead, from a young age, he has drawn sweat and screams. His gift, his compulsion and his need to create is at odds with his family’s religion and tradition, causing him to be seen as wilfully subversive.

Warned by his mentor Jacob Khan that every great artist needs to free himself from something, Asher must choose whether to toe the family line or be condemned, but be free.

A cursory understanding of Judaism and the general political backdrop of the 1950s is helpful to truly appreciate this piece of theatre and catch the inside jokes. And although the theme of a child being at odds with his parents is universal, for many modern audience members the pivotal crux of choosing art or religion may be too thin a premise for an entire play.

With its sparse set, limited action and serious content, this will appeal to a niche audience. But, having said that, there are moments of levity, and the cast of three are exceptionally talented professionals who have consistently proven their acting chops in a variety of works. They all turn in solid and convincing performances.

Alan Swerdlow portrays four separate characters, Louise Saint-Claire three and Robert Fridjhon plays the titular character at varying stages of life ranging from the tender age of 6 through to adulthood. This requires huge commitment and stamina and the trio have managed to execute the play well under the direction of Moira Blumenthal.

My name is Asher Lev is a theatre adaption of Chaim Potok’s 1972 eponymous novel and is very much grounded in real life, and is considered one of the most autobiographical of Potok’s works. Potok himself was a rabbi, writer and an artist, and the controversial crucifixion painting that Asher reveals at the culmination of the play is based on Potok’s own painting title Brooklyn Crucifixion.

The play adaption has garnered a number of awards, and rightly so. However, if a wordy, character-based, thought-provoking narrative isn’t your cup of tea, you may prefer to plump for an alternative show.

My name is Asher Lev is showing at Montecasino’s Studio Theatre until 3 September 2017.