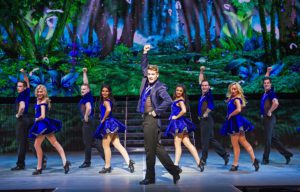 A magnificent ticking clock opens the latest production of Lord of the Dance and, as it strikes 12, we are flung back into the history of this worldwide phenomenon. We meet Michael Flatley (albeit in the form of a hologram) and listen to the story of how he pioneered the biggest grossing dance tour in the history of entertainment.

All very impressive, of course, but it’s when I first hear the sound of the violin that my heart truly leaps. Beautiful dancers stream onto the stage, legs flailing about in synchronicity, and we are hurled – mouths agape – into an Irish fairyland.

Much like that of a well-scheduled variety show, Lord of the Dance consists of short bursts of entertainment. We’re treated to lines of dancers ruthlessly tapping their feet in such a way that an entire beat is added to the music and, minutes later, we’re serenaded by the extraordinary vocals of Rachael O’Conner. Though her primary role is to cover up costume changes, she shines as though it’s her solo concert. This production is full to the brim with exceptionally talented individuals.

One of my favourite characters is the outrageously flexible Little Spirit, played by Jessica Judge, who represents peace and tranquility in the Irish dreamworld. Clad in muticoloured latex and always clutching a flute, she prances around delightfully and performs tricks and flips with the ease that can only come from years of acrobatics and gymnastics.

James Keegan, who has been handed the baton of Lord of the Dance, leads the cast with charm, strength in movement and a heroic stage presence. It’s a dizzying task to keep up with his lightning-quick footwork, and you can’t help but root for this protagonist.

But as with all fairylands, there is a lurking presence of evil that threatens to disrupt the harmony. And such is the plot of Dangerous Games – the classic fight between the good guys and the bad guys.

Without spoiling the outcome of the plot, I must commend the production. Every costume is pristinely crafted for its particular scene – ranging from the angelic chiffon mini-dresses to the robotic, lit-up gear of the evil cyborgs. The computer generated screen, though simplistic as a backdrop, succeeds above and beyond in creating the atmosphere. Unicorns and deer frolic through the greenery, while in the darker, more sinister scenes, flames cover the entire back section of the stage.

Yet it is the Irish tap dancing itself that is, of course, the core of Lord of the Dance. The technique of the dancers is truly something to behold, and I can’t help but cheer with joy when the full cast taps as a perfect unit. Admittedly, I enjoyed the traditional choreography and outfits more than I did their sexualised counterparts. But the name of the dangerous game is to enthral – and they have done so spectacularly.

Lord of the Dance: Dangerous Games is on at Teatro at Montecasino until 3 September 2017.