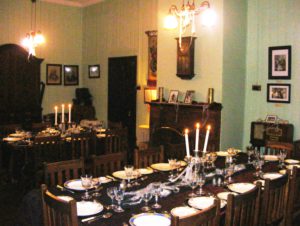 I expected a scene from an Agatha Christie mystery – a motley group of people holding hands around a table in a darkened room, quavering “Who’s there?” and being answered by a voice beyond the grave issuing from the entranced host. But no – with 24–30 people there, it was rather more like a ghost ride in a Victorian fun house or a theatrical spectacle.

Smuts House museum in Irene is worth a visit at any time. A humble tin roofed affair, once an Officers mess that was dismantled like a Meccano set and shipped over from India, it has a homely charm and elegance and filled with beautiful furnishings and pieces from the period. The walls are a gallery of famous faces and events including photographs of the British Royal family – King George, the Queen Mother and the two princesses – who came to stay there. Sadly, too few people make the trip. Either because they don’t know of its existence in this small, quaint little village, or worse, because of a dwindling respect for a history tainted by the past.

The Mystery Ghost Dinners may help to put Smuts House museum back on the map. Those of you familiar with Mark Rose-Christie’s Mystery Ghost Bus Tours which have been running successfully for the past 17 years will love this new monthly addition to the popular franchise. Those of us who aren’t may find it amusing if a little corny.

On arrival, we are greeted with a glass of sweet, red sherry served on the veranda where a cash bar offers wine, liqueurs, spirits and beer. The group begin assembling in the low-lit main sitting room to the dramatic strains of Lloyd-Webber’s ‘Phantom of the Opera’ is played on Smuts’ own piano by the flamboyant Mark Rose-Christie, clad in Draculaesque garb complete with vampire canines. At his side, his young son, Kyle, plays the straight assistant.

Once all have gathered, the ghostly tour begins with the spectre of James the cook seen in the doorway of the best guest room (where both the Greek and British Royal Families slept). Apparently, that was where the kitchen was once situated and so his spirit still lingers there. The group is split in two and guided round the rest of the house’s ghostly apparitions (the fading likeness of Paul Kruger seen between the flickering bedside candles in one of the bedrooms, or the girl who whispers “perd, perd”), allowing us to see more of the style and furnishings of the period. Finally, we end up in the large dining room where three rectangular tables have been elaborately laid with found pieces of period tableware.

The dinner menu is suitably ghostly-themed. Eyeball Soup (two dumplings poached in a chicken consommé), Braised Ghoul Shank (lamb shank braised in red wine, garlic and tomato with vegetable ragout on a bed of fluffy mashed potatoes) and Devil’s Food Cake (Cape brandy pudding with caramel sauce and cream) followed by coffee and Ferrero Rocher chocolates. The barmen are ready to take and deliver drink orders from the cash bar. One can pay by card as well as cash.

At one end of the dining room, a small staging area has been set aside for more displays of ghostly mystery performances in between each course. After starters comes a Victorian-styled séance using period props such as ‘spirit slates’ to perform ‘automatic writing’, followed by a ‘Spirit Vaudeville Cabinet Act’ after the main course where Kyle acts as the ‘medium’ – an act which at the time was to have inspired the famous escapologist, Houdini. And finally, an appearance of a supposedly chilling presence at the end of dessert.

Rose-Christie provides an informative history of the development of the interest in spiritualism during the Victorian era – a time when scientific discoveries such as Darwin’s theory of evolution were beginning to shatter conventional religious beliefs. So even you are a sceptic like me, you will learn some interesting facts and with good food, plenty to drink and a bunch of good mates. It’s difficult not have a jolly good time.

The Smuts Mystery Ghost Dinners will be held at Smuts House museum in Irene once a month from 7pm – 11pm for group bookings of 24-30 people.  However, the public can try out the event by making individual bookings for a one-off opening event.  The first public Mystery Ghost Dinner on 23 August has been sold out so another final once-off public event has been arranged for 24 August.  After that, only group bookings of 24-30 people will be allowed.  Cost will be R595 per person with a cash bar.

The Mystery Ghost Bus will run tours in Johannesburg on 18 Aug, in Irene and Pretoria on 19 Aug and in Cape Town on 19 Aug with ‘Pub & Grub’ stops, poltergeists, EVP recordings, dowsing rods, castles, a dark haunted room, graveyards and much more. Cost is R369 per person.