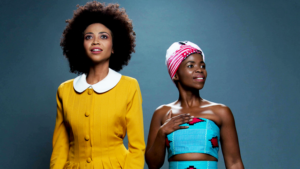 Calling Me Home is a sweeping, star-crossed, cross-continental love story set against a backdrop of war and migration. This brand new musical is South African from inception through to finished product, showcasing some wonderful home-grown creativity and talent. That in itself is a fabulous achievement and it’s wonderful to learn that as part of the process the #callingastar competition was instrumental in identifying and boosting promising young South African performers.

Writing, scoring, casting and producing an original feature length musical from scratch must have been a gargantuan task. Bursting with both big names and fresh talent, Calling Me Home has so much promise and there is so much to be proud of. Indeed, the opening scenes are engaging and visually stunning, setting the story in motion with a young girl fleeing overseas to safety while her brother goes to war.

The animated backdrop and excellent use of different heights on the set gives a surprisingly effective feeling of space, time and movement. However, once the main character, Grace, reaches safety, her story line evaporates and the focus shifts to new characters, which is confusing. Unfortunately, from this point the plot slows and character development is rather thin with only Samantha Peo’s Isabella having a recognisable character arc with redemption and personal growth being evident.

Nevertheless, the 33 strong cast belts out a range of stunning vocals which are a pleasure to listen to, weaving together their operatic, pop and classical styles. Lead Lynelle Kenned in the role of Grace sings like a songbird with “Trail of Stars” being a showstopper.

For a taste of Calling Me Home’s sound, you can listen to the hauntingly beautiful “Tomorrow” and African inspired “Calling Me Home” online (visit YouTube). There are indeed some gems in the score. However, the songs pretty much all fall on the sentimental spectrum, perhaps leaving the audience with a feeling of too much ballad, not enough beat. Lighter moments are also few and far between.

To its credit, Calling Me Home looks and sounds absolutely top notch and the cast sing their hearts out. The passion of all involved to realise this project is unmistakable and it is undoubtedly a grand accomplishment. It’s especially pleasing to support such a wholeheartedly South African production.

However, it’s a long show (close to 3 hours including the interval) and would perhaps benefit from a sprinkling of livelier numbers and a scoopful more cheer to ensure fullest audience engagement.

Only time will tell whether or not Calling Me Home has that intangible “je ne sais quoi” appeal and staying power that could see it up there with some of the world’s best loved musicals.

Calling Me Home is on at the Mandela Theatre at Joburg Theatre until 3 September 2017.