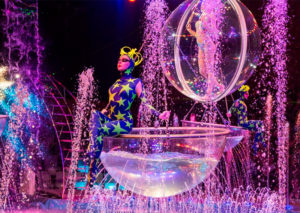 It’s impossible to give a fair and accurate review of an incomplete show. Unfortunately, some of Splash’s key performers were absent due to visa issues, so the show as seen was not the complete magical watery wonderland that had been promised.

The opening and closing acts were excellent. Both the Russian Swing and the Wheel of Death were well executed and had the audience biting their nails. There was also a magical statue act, which is difficult to describe, (and we wouldn’t want to spoil it), but it was incredibly clever and well received by the audience.  The aerial acts were good, the laser lights were cool and the popcorn was tasty.

Sadly, the rest of the show did not live up to the hype. The promo pictures did not match the show we saw. The ‘water’ element of Splash didn’t come into play until after the interval and even then, there was virtually no contact or interaction between the performers and the water.  They performed around it rather than in it or with it.

There were no synchronised swimmers, no water pistols or mermaids and no watery magic tricks.  In all only one performer actually got obviously wet when he sailed through a veil of water three or four times on his aerial rope. Even the clown managed to stay bone dry and avoided any kind of pratfall into the water, which seems like a missed opportunity.

There was not a single splash.

In the business, the saying is that the show must go on, but in this case it might have been better to wait and present the fait accompli rather that the watered down damp squib audiences have experienced thus far in South Africa.

Hopefully the paperwork will get sorted out and the rest of the performers will arrive sooner rather than later and put the splash back into Splash allowing future audiences to enjoy the show they were expecting.