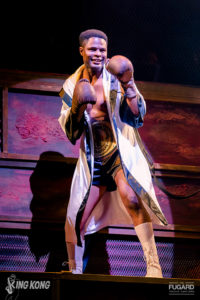 Considering the original play’s mega success, I can’t imagine the amount of pressure that Jonathan Munby must have felt when he took the director’s seat. In 1959 King Kong was seen by 200 000 South Africans, playing to a record-breaking and multi-racial audience during the height of apartheid, before it transferred to the UK for a 200-performance run.

But Munby and his creative / production teams have pulled it off. Brilliantly. From additional music and arrangements by Charl-Johan Lingenfelder, groovy choreography by Gregory Maqoma, and Birrie le Roux’s gorgeous costumes right through to the efficient music direction by Sipumzo Trueman Lucwaba, King Kong 2017 is a knockout.

A live nine-piece orchestra accompanies a star-studded cast as they portray the famous story, clad in stunning 50s-inspired costumes while gallivanting around an innovative and amazingly designed set. The updates to script and music, coupled with a flawless sound system, add a fresh 21st century twist without disdaining the original. The end result is not only an immaculately staged piece of theatre, but also a tribute to South Africa’s performance arts legacy.

Internationally acclaimed as South Africa’s first musical, the original King Kong introduced the now iconic talents of Miriam Makeba, Hugh Masekela and Thandi Klassen to global stardom. It is no wonder that only the best actors were selected to reiterate the masterpiece. Assuming the lead roles, Andile Gumbi (as King Kong), Nondumiso Tembe (as Joyce), Sne Dladla (as Pop), Sanda Shandu (as Lucky), Lerato Mvelase (as Petal) and Ntambo Rapatla (as Miriam) articulate the events that led to the tragic fall of renowned South African heavyweight boxing champion, Ezekiel Dlamini, also known as ‘King Kong’.

The story is based on Dlamini’s life, which over half a century later still mirrors South Africa’s ills; violence, racial segregation, alcoholism and the murder of women by their intimate partners. The play tells how the great King Kong falls in love with a feisty shebeen queen, Joyce, before slipping into a downward spiral of intoxication, street fights, and jail time, with the almost inevitable consequences. As comic relief, the multi-talented Sne Dladla adds an appreciated dash of humour in his narration – a welcome escape from the more sombre aspects of the storyline.

King Kong is a great South African story and one of our country’s cultural milestones. Hats off to the Fugard Theatre for retelling this story with such sheer brilliance and bravado.

King Kong The Musical is on at the Mandela Theatre, Joburg Theatre until 8 October 2017.