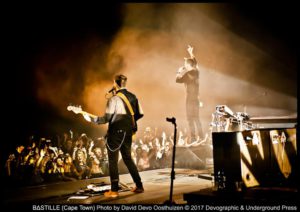 People turned out in droves to see Bastille on the Cape Town leg of this UK rock band’s world tour. It was their second time playing here and this time they owned their visitation with a powerhouse, high-energy act that rocked from the very first note to the last. Bastille shot to stardom back in 2013 with the release of their first chart topper ‘Pompeii’, and since then have been nominated for a myriad of awards, giving credibility to a live performance that was nothing short of amazing.

Bastille’s integration of pop, hard indie rock and electronic elements make for a layered wall of sound that doesn’t let up and last night was every bit the experience people came to see. The band’s lead singer Dan Smith is a formidable presence who animates the performance with a vocal showmanship that is fitting of the international sensation the band has become. They weaved seamlessly through high octane indie rock songs, power ballads and heartfelt acoustic tunes – making for a fully rounded, world-class show that would give any equivalent a run for its money. They were backed up by an impressive light show and an interesting, albeit confusing, TV news narrative which ran intermittently behind them on the LCD screen.

Smith’s crowd interaction was particularly notable as he jumped into the audience and bulldozed his way through the mob of ecstatic fans. With a practiced focus, he sang his way through the plethora of outstretched hands being thrown at him from all directions. Later, he found himself atop the balcony, belting out an intimate number in general seating. From between the cheers of screaming high school girls he extolled, “We’re not that different you and I,” as the lights went black, allowing him to run back to stage with a trail of skinny-jeaned groupies in tow. His response comes in the form of a cover of TLC’s ‘No Scrubs’, an unusual throwback to the 90s that got every person over the age of 35 chanting along: “I don’t want no scrub, a scrub is a girl who can’t get no love from me…”

Bastille closed with ‘Pompeii’ and thousands of fans sang along to the song’s catchy vocal riff.

The show lasted nearly two hours, with another two hours of pre-Bastille openers added in the form of singer Matthew Mole and pop band Opposite the Other, who together illustrated how South African music is able to hold its own right next to that of a well-polished international act – both openers imbuing the space with their own unique flavour. Mole had an otherworldly element to his performance that one can’t exactly pinpoint and Opposite the Other will invariably become a household name.

Bastille performed at Cape Town’s Grand Arena on Wednesday 4 October 2017. They will perform at Emmarentia Dam on 7 October 2017.