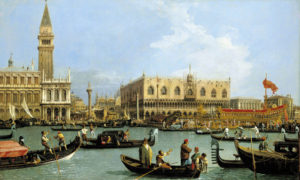 Rosebank is a Mecca for art lovers and I enjoyed wandering from the Exhibition On Screen’s viewing of Canaletto and The Art Of Venice to the Everard Read Gallery sculptures of Angus Taylor.

The Exhibition On Screen at Rosebank Mall Cinema Nouveau takes us on a tour of over 200 paintings, drawings and prints by Canaletto and some of his 18th Century counterparts. This collection is the basis of the Royal Collection displayed at the Queen’s Gallery, Buckingham Place and Windsor Castle. Bought by the young King George 111 in 1762 from Joseph Smith, the British Consul in Venice was a speculative art dealer who targeted the lucrative British market for landscape paintings. His British clients wished to both advertise the Grand Tour they had undertaken as well as to remind them of the places they had visited and enjoyed. Smith quickly moved away from collecting the works of other popular landscape painters of the time to collecting Canaletto because, as he explained to his clients, one can feel the sun in his paintings.

The film takes us to Venice too so we can compare the real views of this fantastical city with Canaletto’s interpretation of it. Curators and historians take pains to argue that while it may seem almost photographic in appearance , Canaletto deliberately ordered and designed his landscapes to his particular taste and viewpoint, peopling it with characters that were real enough but not necessarily in the scene at the time and moving columns, structures and objects to realise his artistic vision.

A few streets down from the Rosebank Mall, at the corner of Jellicoe and Keyes Avenue, is the Everard Read Gallery. People say that once you have your work exhibited here, you have made it as an artist. A South African of Scottish heritage, Angus Taylor, could be seen at home amongst his monumental sculptures, fully togged in kilt and sporran. His exhibition here is entitled ‘In The Middle Of It’, suggesting where he finds himself at this point in time: beyond the first anxieties of a struggling artist at the beginning of his career, locating himself between the first and third world (Africa and Europe), and constantly immersed in the challenges of his work.

The first work, ‘Resistance As Nurture-Series 1’, is a set of small bronze figures in various stages of struggle. Set on a conveyor belt within a transparent box, the figures revolve in never-ending movement. It initially reminded me of some of Kentridge’s mechanical artworks, but I was also reminded of Sisyphus’s eternal struggle carrying his burdensome rock up the mountain. Later on in the exhibition, these figures are lined up in a row and we can peruse them in greater detail. This work best sums up the title of the exhibition and the artist’s view of where he sees himself.

In the second room are the monumental statues of ‘The Gatekeeper’, one with a red Jasper head, and another with an outstretched arm and what looks like a Graphite head. The bronze is riveted together with bolts and molded to form the immense bodies. There is an attractive quality to the roughness of the texture – it reveals the work of the craftsmen he hired to piece his vision together and somehow makes these overpowering figures more human and less godlike. I notice too that the hands and feet are delicately carved – showing the fragile detail of knuckles and lines and well formed nails – a reference perhaps to the refined dexterity of the artist’s hands in making these works.

The stones – red Jasper, black Belfast Granite, and other stones with various stages of iron in it (ferric or ferrous) or with bits of glittering quartz and silica – are found pieces picked up in Belfast and Rustenburg that form the bedrock of his works. They are stunningly beautiful – every layer itself telling a story of the earth’s history.

Made with strips of metal, the final piece fills a whole room and depicts a man seated on the ground with his legs folded to one side while leaning his weight on one hand. The monumentality of the piece belies the tender vulnerability of this pose. A photograph of the same piece made in stone is shown installed in a public park or garden.

This is an exhibition I was glad to have seen and heartily recommend a viewing.  One feels almost exalted at the end of it.

Canaletto and The Art of Venice is on at Ster-Kinekor Cinema Nouveau from Saturday 7 October.

Angus Taylor – In The Middle Of It is showing at the Everard Read Gallery until 2 November 2017.