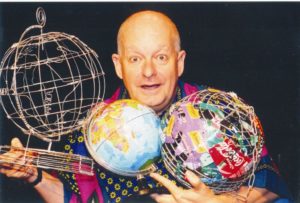 Reviewing a Pieter Dirk Uys-performance nowadays (especially for his fans) is like critiquing an annual Saturday evening dinner party at your best friends’ place. It stands to reason that you are going to enjoy it. You know what to expect, although there could be some inspiring detours into unpredicted terrain with new topics, which makes the evening even more exiting.

Enough to say that you will get everything from this show that you’re used to. But what makes it so agreeable and entertaining is presentation: so simple and uncomplicated, audiences just sink into their chairs and stay there for 80 minutes without being aware of how quickly the time passes. Uys keeps you riveted by simply chatting to you as if he’s known you for 40 years.

As so often before, Uys stands on stage and doesn’t move around a lot, so there are no ‘big show’ numbers or attempts to prettify the production. The power lies in his easy-going rapport with the audience (who all feel like his friends) as well as some new material that the regulars may not know. And for those in a nostalgic mood, there’s the chance to cackle at his impersonations of P.W. Botha, Piet Koornhof and his alter ego Evita Bezuidenhout.

The most heart-rendering sketch – the highlight of the show – sees an elderly man packing up his belongings to move to a retirement village while his old dog, Smelly, is watching him, probably near heaven’s door. The quiet sadness and melancholy memories are touching and counts among the best Uys has delivered in recent years. Angela Merkel and Theresa May also pop up unexpectedly and in quick, cutting and witty sketches, Uys comments on their recent utterings or appearances. (Merkel’s hair!)

When in Doubt, Say Darling helps you to smile (in my case it was a cruel grin) at what is happening in our country now and realising: it is your state of mind, your own sense of having fun, and finding the dark comedy and satire in many real-life situations that keeps us going. Strongly recommended. And when in doubt, just buy a ticket.

When in Doubt Say Darling is on at Montecasino’s Pieter Toerien Theatre until 22 April 2018.