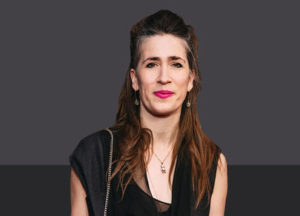 Imogen Heap is multi-talented. She’s a singer, songwriter, record producer, and audio engineer. On top of that, she’s now the driving force behind Mycelia, a music blockchain platform – a record of cryptocurrency transactions linked in a network – aimed at creating a fair and transparent music industry, online.  And this month she’s in South Africa with her Mycelia tour.

What’s on in Joburg chatted to Imogen to find out more about Mycelia.

The concept of Mycelia is a fabulous one. For those new to the term, can you briefly tell us what it is?

Mycelia is bringing to light a healthy music ecosystem for music makers and the services that work around their music both peripherally and directly. Its aim is to open discussions between all of the services, in a neutral space, to discuss future technologies and potential structures to help create better flow in the music industry, better acknowledgement and faster payment.

In light of Blockchain, specifically, and the development in artificial intelligence and identity, we can really get stuck into these conversations. It’s not just me, or the music industry, but everyone. The whole planet is looking into different ways to do business, in more efficient ways, and with more transparency in the value chain, so it’s crazy not to discuss it. There are lots of discussions going on in many different closed circles, as is often the way, and it’s not in the interests of the musicians to not be in those conversations.

And that’s what Mycelia is… an open door to discuss the future potential in the music industry and beyond.

What then, is the Creative Passport?

It’s a tool to empower the individual music maker to join a collective of music makers that are verified and trusted by the music industry and beyond. It’s an identity that’s not Facebook, Google or your record label or management. Rather, it’s you, as a creative, able to interface with the world 24/7, digitally. It means that you can have all that you need to be on show, for people to find you, credit you, pay you… whatever they need to do.

You’re doing a 40-city, around-the-world tour. Are you only performing live or are there other appearances and surprises?

We’ve been doing workshops across Europe and are coming to do a couple in South Africa before doing more in the States, Canada and Australia. The tour includes workshops, exhibitions and talks to launch Mycelia’s Creative Passport and, of course, performances.

We’ve had lots of great interactions at the workshops. It became clear that one of the most exciting things that can come out of the Creative Passport is that we need to simplify. It just needs to be a magnet for all your services that you’re going to use and all the people that you work with.

It must be great to get input from musicians all over the world, who all do things differently.

What happens when a bunch of musicians get together in the flesh… we talk about our experiences, we give support to each other, we give advice to each other, we share what works and what doesn’t work, what’s good and what’s bad. We don’t have a way to do that, really, in a shared online space. I think what will emerge out of this, which is brilliant, is a peer-to-peer support network where we can exchange ideas, potentially plot a festival, or write an email to a specific label to change something that they’re doing that we’re all annoyed with that maybe isn’t right. It’s a way for us to get organised, pool our resources and knowledge. We can all then put our individual areas of expertise into action by becoming one of many rather than fighting it alone.

Yes, for instance, in Turkey, there’s a lot less support for the arts and for musicians going out of the country to do sessions or live shows… visas are hard to get. I suppose it’s a midway country where there are collection societies, so there is some remuneration, but it’s differently structured to how it is in Europe. What we realised is the need to flatten the playing fields for all musicians. The Creative Passport makes music makers discoverable. That’s the exciting bit. Look at all the possibilities if we just get together and show the world that we are here to do business. I think in the future we’ll see a real abundance of musicians, not the scarcity that we see now, with just a few making a success and a living from music. And not only in music: a real abundance of the arts in general.

Imogen Heap is performing in Joburg with her long-time collaborator, Guy Sigworth (19 and 20 March) and is running workshops (18 and 21 March) in the city as well.