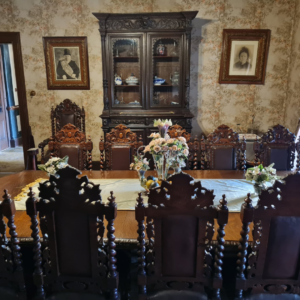 A virtual tour through the house of Paul Kruger, the late State President of the South African Republic renowned internationally for his struggle for freedom from the British during the Second Boer War (1899-1902).

The Kruger Museum and its contents bear witness to the forceful personality of the man who lived there as leader of a small republic in southern Africa, at a stormy and unsettling time of his people’s long struggle against British imperialism.

The Museum consists of the original house in which S.J.P. Kruger, President of the old Zuid-Afrikaansche Republiek (ZAR), and his family lived during the last years of the 19th century, as well as two display halls and President Kruger’s State Railway Coach.

The Kruger house, built in 1884, was the original home of Paul Kruger, President of the former Transvaal Boer Republic. The house has been refurbished to reflect the time when the President and his wife, Gezina Kruger, lived there. International admiration for Paul Kruger and the struggle for freedom from British imperialism, his journey to Europe and his exile, are illustrated in the exhibitions. Adjacent to the Kruger Museum is the former Bantu Commissioner’s Office Building, erected in 1932 on the same site as the old Native Pass Office. The people of Tshwane and environs remember the building as ‘gaMohle’. Its history of enforcing the Pass Laws dates back to 1896 when Paul Kruger’s government used the site for its police headquarters.

The virtual tour allows viewers to roam around the museum and explore at their own leisure – no admission fee required.  A selected number of items of interest can be clicked on for more information.