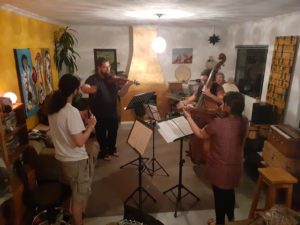 For a limited time, Here be Dragons teams up with Iluminar Productions and the Drostdy Entertainment Channel to stream their complete show – Folk 101 – online.

The show is pre-recorded by the talented and experienced crews of 339South and Haudio, video and audio respectively. The production is a landmark in that all parties involved opted to work for a percentage of ticket sales: offering their online audience a high quality product without breaking the bank.

Once a ticket is purchased viewers are able to watch (and re-watch) the show anytime until its expiry. There is also an option to leave a further donation, which while not mandatory would go a long way in supporting everyone who made the production possible.

A description of the show reads as follows:

“Iluminar Productions is proud to represent the talented Folk Baroque band Here be Dragons with their latest show Folk101. This 5-piece ultra-talented group of musicians manage to transport music lovers into a time long forgotten, subtly educating their audience on how folk music influenced art music (and vice versa) since the 16th century. They travel across Europe combining unexpected musical styles, influences and instrumentation while delivering exceptional instrumental performances, contrasting a selection of compositions by renowned composers with original songs by bandleader, composer and musician Jan-Hendrik Harley. What is perceived to be a ‘Classical’ performance is also accessible to those who are not too familiar with this genre but who do appreciate and identify with folk music. They take the stiff upper lip out of the music and demonstrate that everyone can appreciate music from this era.”

Here be Dragons is a South African ensemble that performs early music in a folk idiom. They have presented programmes at numerous festivals in the Western Cape area, most notably at the Toyota Woordfees and the Cape Town Baroque Festival. The band consists of Joshua Frank (recorders), Annien Shaw (violin), Mariechen Meyer (double bass), John Pringle (percussion) and Jan-Hendrik Harley (violin/viola/5-course guitar/mandolin and direction).