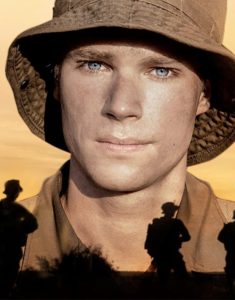 Moffie is available to stream online featuring the critically acclaimed movie directed by Oliver Hermanus that follows the story of a white young man serving military conscript and explores sexual identity in an hegemonic and oppressive environment.

The film is set in the 1980s and illustrates the conflict on the southern Angolan border, where the main character Nicholas Van der Swart (Rikus Terblanche) develops a romantic connection with a fellow male soldier.

The film underlines the way of life during patriarchal rule, where SA is governed by the codes of conduct of the apartheid regime. The oppressive ideologies are endured by the characters in the film that displays the instructions of how people should live and treat others.

The military fights the threat of communism and “die swart gevaar” (The black danger), where teenagers (Above the age of 16) are also on the frontline with the apartheid forces.

Moffie is fourth South African film to receive an official invitation to the Venice Film Festival in the 76 years of the festival. The film is based on the memoir, ‘Moffie’, by Andre-Carl van der Merwe.

The public can purchase tickets at a cost of R150 for a duration of 24 hours.