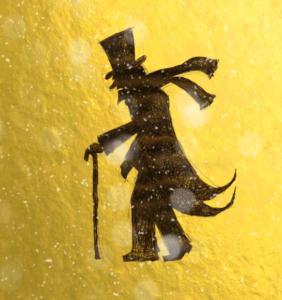 Wrap up warm for Dickens’ timeless and magical seasonal tale of redemption and the Spirit of Christmas. Scrooges’ Christmas past, present and future has been revitalised, repackaged and adapted for Montecasino’s intimate Studio Theatre.

Directed by Elizma Badenhorst, this version may not be as thrilling or lively as other productions – there are no dancing children, no snow and no special effects wizardry. Instead, the team behind this production have used extreme creativity to tell the entire tale with only two people on stage. And therein lies its charm.

The unseen narrator, voiced by Christopher Dudgeon, keeps the story moving at a steady pace and puppetry and animation are cleverly used to round out this two-hander. We particularly loved the hilariously rotund ghost of Christmas past and the animated and jumbled rendition of ‘Twelve Days of Christmas’.

Jason Ralph’s Scrooge is lighter, funnier and more loveable than other stage and screen incarnations. A Christmas Carol isn’t generally considered to be a barrel of laughs, but this version has worked in a number of gentle comic moments which is refreshing. Ralph is accompanied on stage by Naret Loots who plays all the other characters, operates the puppets and is also the talent behind the animation – clearly, a multi-gifted young woman.

The running time is a solid hour without interval. This works pretty perfectly for families as the children remain engaged for the full 60 minutes. There are some lovely touches, such as a scattering of stripy scarves draped among the seating for audience members who are feeling a bit chilly. And at the very end, an incredulous and happily transformed Ebeneezer Scrooge asks, “Is that your Christmas choir?” The young Christmas caroller nods enthusiastically in response. At this point, the audience is warmly encouraged to join in a festive sing-along, with the words projected on a screen at the back.

All in all, this is a bijou and immensely inventive production well suited to Montecasino’s cosiest theatre. This version of A Christmas Carol radiates both innocence and quiet charm, qualities rarely found in many modern productions that rely on larger casts, slick set design and a more complex stagecraft. An intelligent and entertaining family-friendly production, it’s simply perfect for the festive season.

A Christmas Carol is on at Montecasino’s Studio Theatre until 14 January 2018.