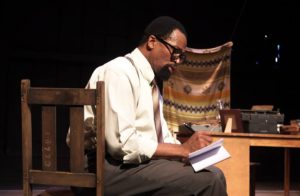 Fifties Sof’town blues has a very particular texture; its rhythm gets your foot beating, its history gets your heart trembling in tune with the ebb and fall of a small gem of a place which saw its golden years under the thumb of apartheid. Siphiwo Mahala’s House of Truth does something similar to what Khayelihle Dominique Gumede did in Crepuscule: it takes apart elements of the colourful life of Sophiatown educator, poet and editor, Can Themba and splays them into a cohesive reflection of the man and the period, effectively looking at his life as though it were a compilation of his stories. And by and large, the work succeeds.

This is a slice of Themba’s life, and it’s a very rich flavoursome slice that has all the brandy and spice, all the cherries and anecdotes that make it resonate and hum. But the work is a deeply textual one. And while it takes you through the abysmal injustice Themba faced under Native Education of the day, and feeds into the 1950s context regarding the media, the mayhem and the bulldozing of the area, it effectively remains a deeply textual play, which could well be a radio play. The writing is palpably beautiful and you want to hold and savour each turn of phrase, but it is the potency of Sello Maake kaNcube’s performance that makes it sing as a theatre piece, with all the requisite dignity and vulnerability that holds it together.

Similar to Blonde Poison, currently onstage, House of Truth is an essay about an historical period. It’s a one hander which is held together by the charisma of the central performer, which is the main reason you need to see the play.

But unlike works such as Sylvia Vollenhoven’s Cold Case, for instance – or If We Dig, directed by Megan Willson – the denouements and the fierce drama in the tales within the broad narrative of Themba’s life are very subtly handled. They’re elegant and never crude but sometimes they digress into a shade of dilettantism and while you’re subsumed by the texture of the period and the quirkiness and feistiness of the central character, occasionally you feel assailed by a ‘so what?’ moment. The slice of Can Themba’s life doesn’t convincingly take you from point A to point B in his life, but rather feeds you with his whole world in the space of 90 or so intense minutes.

And then there’s the brandy. It can almost be considered a separate character in its own right in this work. The inimitable late foodie, AA Gill wrote resoundingly and bitingly of how drunks used to be funny in a slapstick and curiously proud kind of way. The infiltration of alcohol through this play is articulated with the delicate hand of a seasoned director; it was something you might have seen in Dop, as well. As the work unfolds, the buzz and blur of alcohol creeps into Themba’s body language and tone of heart, lending the work a tragic counter-image which will seethe in its own quiet way, in your head and heart after you’ve left the theatre.