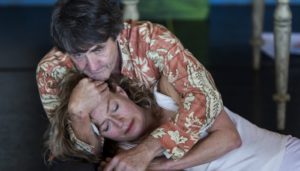 The indignity of mental illness is never an easy topic to extrapolate on stage. It can be complicated by drug-induced fantasies and illogical behaviour that fit and don’t fit into the world. For a theatre work being presented to an ordinary audience – and not students experimenting with stretching boundaries – the nub of the challenge is to represent mental brokenness with both plausibility and dignity, not bruising the one over the other. By the end of this piece, it feels as though you’ve been privy to something that is both too ghastly and too private for it to be staged in a theatre.

The Inconvenience of Wings is a tale woven loosely around the magic realism of a short story by Gabriel García Marquez in the 1950s, The Man with Enormous Wings. It is performed with searing aptitude by an incredibly strong cast, against a beautifully functional set, that is punctuated with doors and windows, nuances and keyholes, but you leave feeling uncomfortably manipulated and morally grubby, if not broken and frightened.

Cast in an inverted timeframe that takes you from 1995 all the way back to 1961, in a very linear way, it reflects on the relationship between Paul (Andrew Buckland) and Sarah (Jennifer Steyn), offering a steep trajectory into the very heart of brutal loss and bipolarity. It touches the way in which trauma can reach so deeply into one’s soul that it can change the workings of one’s personality irrevocably.

And while the topic shouldn’t be taboo, the handling of it in this work is unrelenting: the intensity doesn’t let up for one second. Paul’s an architect and his friend James (Mncedisi Shabangu) is a professor of psychiatry, and a foil for the story to weave in political assertions, but also a sounding board for both Paul and Sarah’s challenges. We never do see Sarah in a state of mind that seems calm or lucid. The focus on nearly thirty years of a relationship highlights only the bad and mad areas, making you in the audience feel as though you are witnessing the enactment of a psychiatric case study, evoking Victorian traditions where aberrations were staged in circuses. It also perplexes you as to why they get together at all.

This is a pity. Love and death, witticisms and hilarity shouldn’t be excluded from a tale of insanity. If you watch Miloš Forman’s One Flew Over the Cuckoo’s Nest (1975), you understand the horrendous context of the world and its severe indictment of institutions for mental illness at the time. But while you’re crying and engaging with the characters, you’re laughing: not at them but at the world in relation to them, and at the niftiness and elegance of the writing.

There’s no laughter in The Inconvenience of Wings and the tears you shed are ones of helplessness  against the lurking monster of manic depression and the drugs that can make it better or break the whole entity. The snippets and snatches of poetry in the text are so beaten about by the context of the dreams conjured by mental illness patients that the magic they may contain is blunted and the fire dulled by your understanding that they’re the ramblings of sick people.

A tale of cup cakes and addiction, angels and traumatised children, this is a tough play by all accounts, and one not suitable for just any audience member.

The Inconvenience of Wings is on the Market Theatre until 16 July 2017.