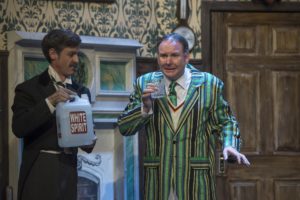 This award winning play just fumbled, bumbled, blundered and blustered its way onto South African shores. Audiences are in for an evening of comedy delight.

When fictional amateur dramatic group called Northriding Polytechnic Drama Society puts on a murder mystery play, Murder at Haversham Manor, it turns out to be a complete farce from start to finish, but in the best possible way.

Everything that can go wrong does go wrong. The acting is hammy, lines are fluffed, the scenery malfunctions and props go missing. All this is punctuated by random bursts of Duran Duran. But, as they say in the business, the show must go on. And so the amateur thespians persevere, hoping the audience won’t notice as the play spirals into chaotic nonsense.

Directed by Alan Committie, the production comes together smoothly, hinging on impressive physical comedy and spot on comic timing. The amateur thespians are played by an eight-handed cast of professional actors, although you could almost count the uncooperative and malfunctioning stage set as a ninth cast member.

Seasoned pros Robert Fridjhon, Louis Viljoen, Russel Savadier, Theo Landey, Roberto Pombo, Craig Jackson and Nicol Franco are complemented by relative newcomer Sive Gubangxa who beautifully holds her own with her more experienced co-stars.  They all turn in excellent performances, with Jackson being the crowd favourite, performing with a maniacal gleam of mischief in his eye.

In the case of this hilarious whodunit, the identity of the killer becomes irrelevant as the audience concentrates on the utter mayhem unfolding on stage. As the show’s tempo increases exponentially, so do the laughs.  In all honesty, I’m not sure who has more fun, the cast or the audience. But either way, the final scene quite literally brings the house down.

The Play That Goes Wrong is hilariously bonkers, but be warned, rather than just tickling your funny bone, you might actually be at risk of fracturing it. Thank goodness for the armrests, probably the only thing that prevented certain audience members from actually rolling in the aisles.

The Play That Goes Wrong runs at Montecasino’s Pieter Toerien Theatre until 30 April 2017.