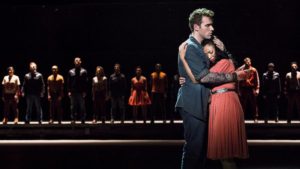 It takes special skill to tease open one of theatre and literature’s greatest works and to reinvent it. It takes even more special skill and creative bravery to be able to produce a work on stage that has been produced on myriads of other stages all over the world and in various mediums, and to make it fresh. Producers Eric Abraham and Daniel Galloway, for the Fugard Theatre, are to be congratulated on the unequivocal victory they have achieved with West Side Story.

Premised on the unadulterated beauty of Shakespeare’s Romeo and Juliet, this downtown New York City tale of poverty and crime, love and hate in a post-Second World War context, touches all the keystones that are triggers to the kind of clichés that give clichés their schmaltzy reputation, but with a set which is at once dazzling and subtle, some extraordinary stand-out performances and a deeply honed and polished reflection of violence and social context, to say nothing of sheer brilliance in design, it’s up there among the best theatre experiences in this city, of the decade.

It begins, however, with some unnecessary and uneasy gimmickry in the resonance between lighting and music and the spirit of the work doesn’t grab you by the throat from the work’s first bars of music, or first steps of dance, as you may anticipate.  The scene is cast with bland clarity, as the two gangs, the Sharks and the Jets, strut their stuff and exacerbate their respective foes. The women in the bridal factory tend to be shrieky. But as the work unfolds, the incredible crescendo it achieves in balancing narrative with design, showcasing Jonathan Roxmouth opposite Lynnelle Kenned with their devastatingly fine voices in the leads, sweeps you away, heart first and not only do you forgive the opening blandness, but you forget it, too.

Making incredibly sophisticated use of the horizontal in the massive concrete-evocative set, an understanding of space and time but also depth of focus is compelling, and with this geometry, something completely extraordinary happens. The tale is a predictable one and you know how it ends, and the songs, from Maria and Tonight, to I Feel Pretty and Somewhere are so well known, they punctuate the piece with familiarity.

But what this director and his enormous cast have achieved here is an offering of a tale which will trigger your tears in spite of everything: the fierce love between Maria and Tony, which flies in the face of their respective gangs’ ideologies is handled with a sincerity and a flamboyance that is not just about the spectacle or the drama. It’s rich with life and fraught with texture. It’s not only about gritty New York values, and a self-conscious use of 1950s slang and dance sequences. It’s something that is lifted to the level of the timeless universal.

Kenned is new on Johannesburg’s stages and slight of built, but supremely skilled vocally, she embraces the whole stage and the whole audience with her presence. Even whilst she is climbing scaffolding or in the scene but off central focus, your eyes rest on her. There’s a demureness and an innocence that evokes Olivia Hussey’s 1968 portrayal of Juliet in Franco Zefirelli’s version of the Shakespeare classic, and a brassiness which gives her soul. But when calamity strikes and death happens, that torsion between her and her lover and her brother is palpable. It’s a moment you won’t readily forget.

If you see one musical this year in Johannesburg: this is it.

West Side Story runs at the Nelson Mandela Theatre, Joburg Theatre until 5 March 2017.